We are continuing to talk about cultural differences between Brazil and other countries. On the previous post we covered Individualism vs Collectivism dimension of Hofstede model and showed differences between Brazil, Germany and USA.
In this post we are going to analyse the Power Distance dimension. This time we have chosen Germany and Russia as the comparison countries. Germany because of high number of volunteers coming to us from this country and Russia as an example of the extreme high score on this dimension. 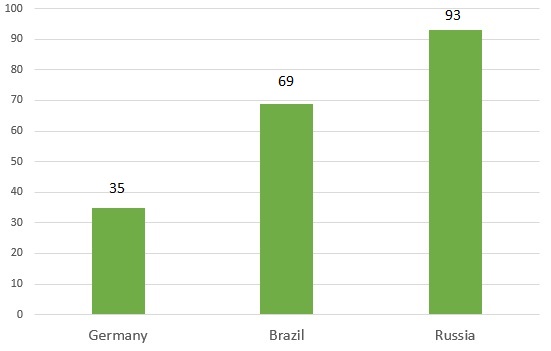 This dimension deals with the fact that all individuals in societies are not equal – it expresses the attitude of the culture towards these inequalities amongst us. Power Distance is defined as the extent to which the less powerful members of institutions and organisations within a country expect and accept that power is distributed unequally.

With a score of 69, Brazil reflects a society that believes hierarchy should be respected and inequalities amongst people are acceptable. The different distribution of power justifies the fact that power holders have more benefits than the less powerful in society. In Brazil it is important to show respect to the elderly (and children take care for their elderly parents). In companies there is one boss who takes complete responsibility. Status symbols of power are very important in order to indicate social position and “communicate” the respect that could be shown.

Highly decentralised and supported by a strong middle class, Germany is not surprisingly among the lower power distant countries (score 35). Co-determination rights are comparatively extensive and have to be taken into account by the management. A direct and participative communication and meeting style is common, control is disliked and leadership is challenged to show expertise and best accepted when it’s based on it.

Russia, scoring 93, is a nation where power holders are very distant in society. This is underlined by the fact that the largest country in the world is extremely centralized: 2/3 of all foreign investments go into Moscow where also 80% of all financial potential is concentrated. The huge discrepancy between the less and the more powerful people leads to a great importance of status symbols. Behaviour has to reflect and represent the status roles in all areas of business interactions: be it visits, negotiations or cooperation; the approach should be top-down and provide clear mandates for any task. (source: Geert Hofstede, Gert Jan Hofstede, Michael Minkov, Cultures and Organizations: Software of the Mind. Revised and Expanded 3rd Edition. New York: McGraw-Hill USA, 2010)

We can see the proof of Hofstede theory in politics. One can guess that the cultures with high score on this dimension would suffer from the corruption on the high levels. Russia as well as Brazil were both mentioned in several corruption scandals involving members of the government. Ridiculous processing of the impeachment of Dilma Rouseff is an example how high authorities are abusing the trust and power given to them. It is considered to be a coup by foreign media. However there were no real public confrontations on the streets which signifies that normal people were not involved in the decision making and may be doesn´t want to be. Hereby it is wrong to say that Brazil and Russia have the problem with their governments, the problem is much more deeper – it is in the culture.

From our personal observation we can say that the high score in this dimension lead to the fact that sometimes the people are very passive at work and tend to wait for the directions and instructions from above and only accept the directions from supervisors. So our volunteers experienced the problem that the employees at NGOs where they were working don´t respond on their requests or suggestions in a collaborative manner only if their supervisor was the one who was giving orders.