The article is written by our volunteer Anna Thiry, student of geography at university of Heidelberg, Germany. Anna volunteered for Comissão Pastoral da Terra (CPT) and participated in various activities of Landless Workers Movement (MST) in Maceió as well as at the “interior” of the state of Alagoas. From her story you will get an idea about land problems in Brazil and MST.

Brazil: Land of Samba, cachaça, pretty women, beach and relaxed lifestyle. That´s what we mostly think of it.
But that there´s this other side of Brazil, this side, that the country holds the second place on the world ranking of the most unequal contribution of land, that´s something most people barely know.
Here in Alagoas for example, the ten most powerful and richest families own much more land, than all the other Alagoanos together. They also control 80% of the federal states BIP.
The reason for that is to find, for one hand, in the colonial history of the country, the distribution of land to European settlers in the 16th century which still is visible. On the other hand, you have the expanding problem of the so called Agrobusiness, where multinational concerns are willing and able to buy huge amounts of land to produce export products, such as soja, eucalipto, maiz or to breed cows for the international market. And, last but not least, you can see the Government´s interest in expanding Brazil´s economy by the so called „Reprimarisation“, the going-back to producing agricultural products, exporting them, and by that rising the economy.
In Brazil, more than 40 Million people still live in a state of misery, or, at least, poverty, with less than 100 D$ a month. To stop that and to change the enormous land concentration, there were founded several social movements. The oldest were founded already in the 40th, but forbidden throughout the military dictatorship between 1964 and 1984. The CPT, The Comissão Pastoral da Terra, is one of the oldest, founded in 1975 as a service to poor people in the rural areas and for the landless, but also for the homeless. When dictatorship came to its end, several other movements, this time much more militant, were founded. For example the MST The Movimento dos Trabalhadores Rurais sem Terra, or, later on, the MLST, the Movimento da Luta pelos SemTerra. From that on, a huge movement started, where the occupation of so called unproductive land (that is, when land doesn´t produce alimentation or when the workers on the land have to work under unhuman conditions) begun and through so called acampamentos and assentamentos (wild settlings and legalized settlings) the state is forced to act, to expropriate the latifundiários (high-scale farmers) from the land and to give it to the landless.
This movement is constantly acting and even nowadays, the agrarian reform, the distribution of the land in a more fair way, is still far away from its implementation. This partly because government´s interest for the settler´s living conditions isn´t the highest and many times, the settlers have to give up because the supply of the settlements is so bad. So occupation and demonstrations go on with the aim to catch the government´s and, over all, the population´s attention for the urgency of the agrarian reform.
There´s still a lot of work to do and still more than 5 million families are waiting for a little piece of land, where they can grow their alimentations and where they can live peacefully.
Under the motto: „A terra e nossa, a terra e do povo“ (The land belongs to us, the land belongs to the people), the landless movement is still one of the most powerful social movements all over the planet.
Manifestation of Landless Workers in Maceio harbour 3rd of August 2015 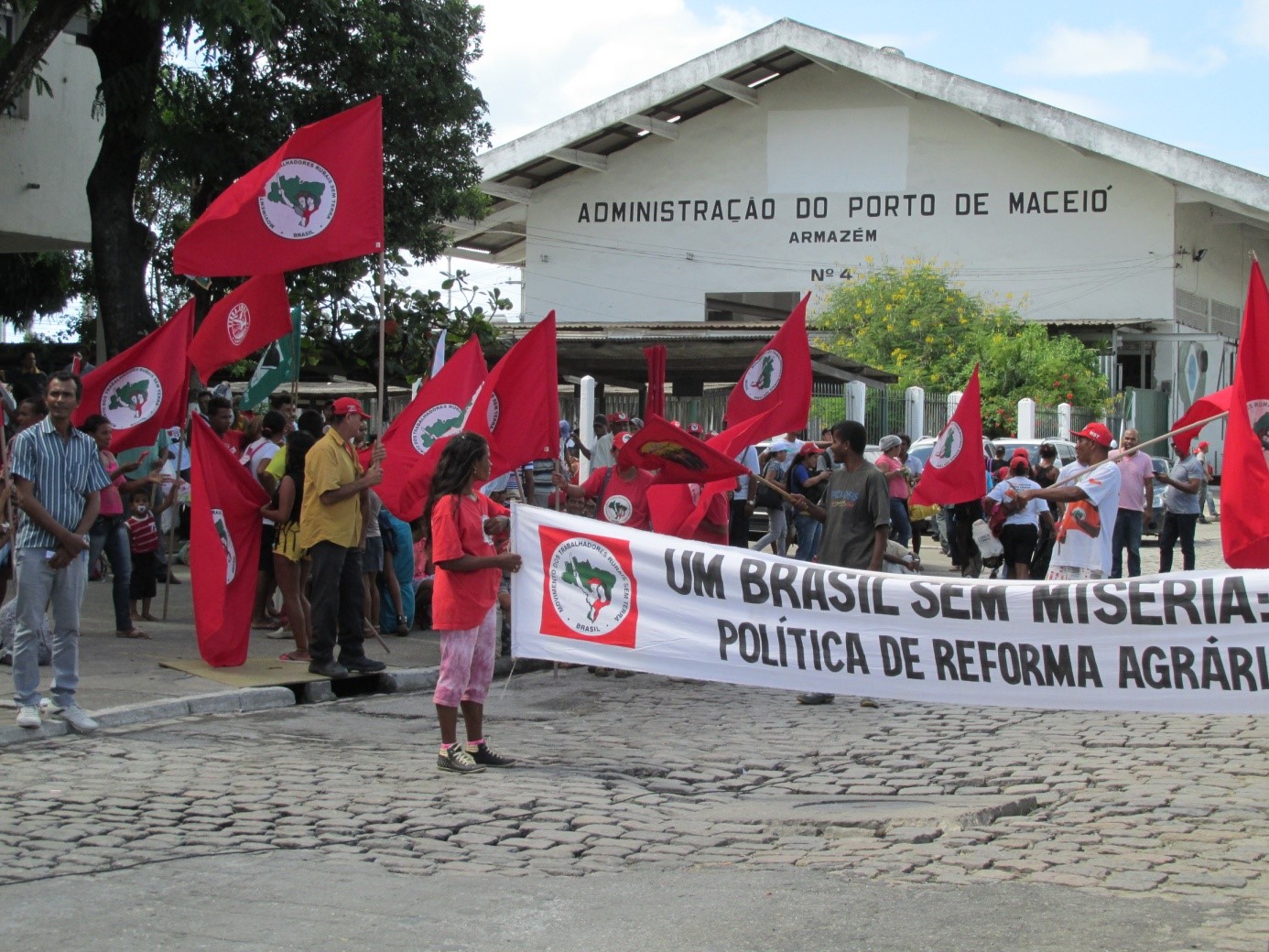 Representative of the CPT at the mobilization at Maceió harbour 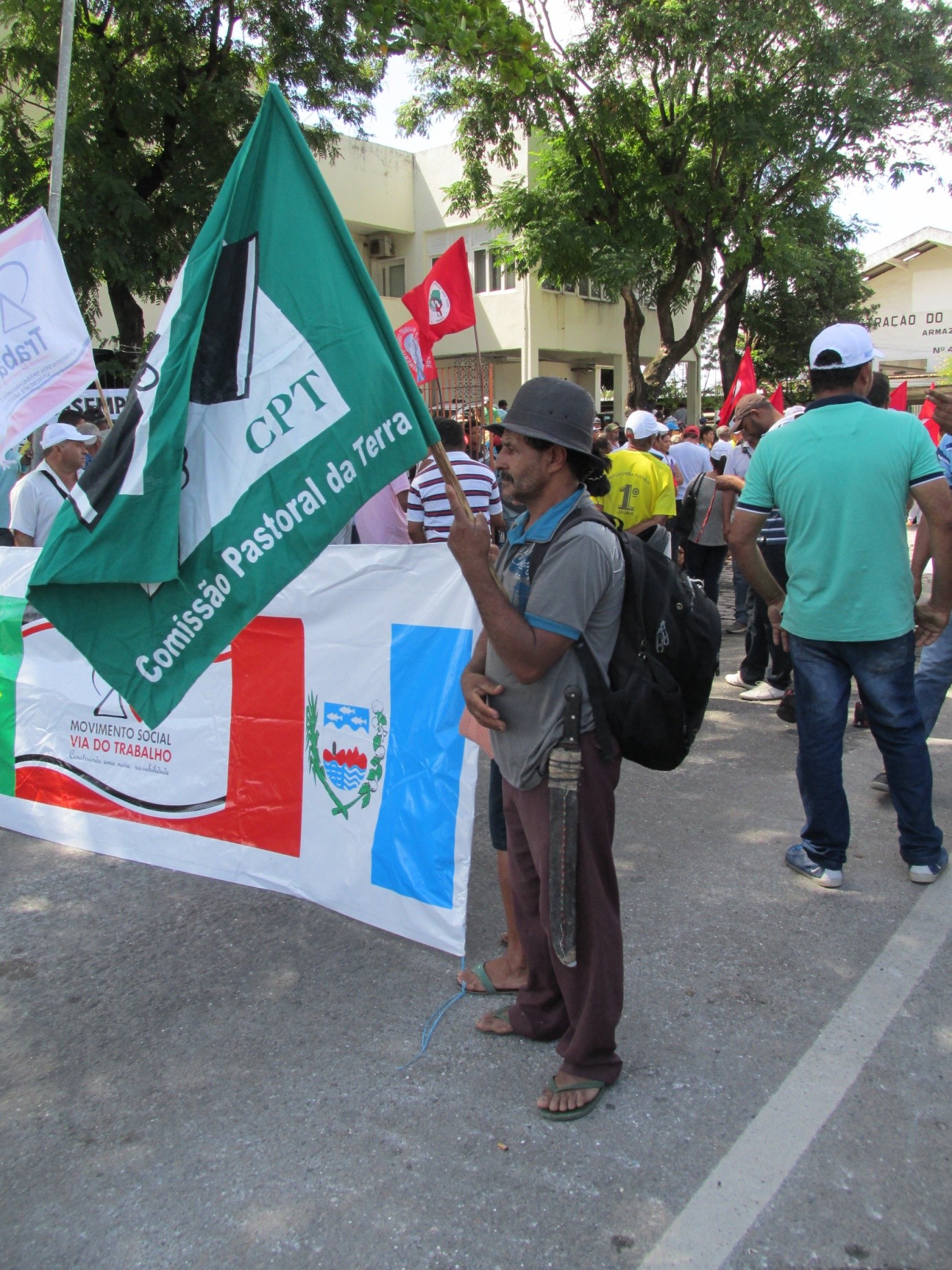