It is becoming more dificult to make a prefered and typical Brazilian dish “arroz com feijão” (engl.rice and beans). The price of beans has increased by 33% in average from the beginning of the year. In some supermarkets the price of one kg of beans is equal to 5 kg of rice. In our local supermarket the prices went up from 3-4 Reals till 13-15 Reals per kg. The reason for this increase in on the fields. The harvest was difficult this year. During the planting the fields suffered from the long period of rains followed by the period of drought. And now the extreme low temperatures killed a lot of plants. As a result a 20% lost in the production.
The beans type “carioca” most consumed in Brazil have increased in price the most. To economize a lot of people started to buy the black beans instead, which didn´t suffer that high increase. Black beans are accompanying Brazilians from the start of colonization and already then it was the food for the hard times. 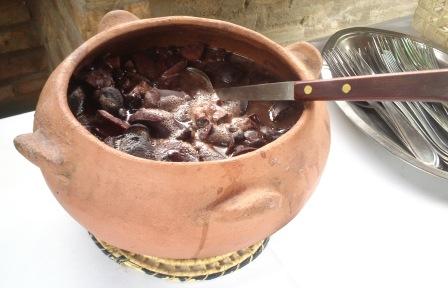 According to legend, the origins of Brazil’s national dish, feijoada, comes from the slaves´ table. Slaves would supposedly make this dish out of black beans and pork leftovers given to them from their households. These leftovers included pig feet, ears, tail, and other portions seen as unfit for the master and his family.
The dish is very nutritious and tasty and helped the slaves to sustain the long working hours on the fields of the masters.

Afterwards feijoada became the part of Brazilian national cuisine. It is very common to prepare feijoada for some celebrations. This way you can prepare delicious and cheap food for bunch of people. It is normally served in the big traditional pots, together with cabbage and sliced oranges. Each guest is free to serve himself “a vontade” (engl. as much as one wants”) and normally the feasts lasts for hours. The typical drink accompanying feijoada is definitely caipirinha!